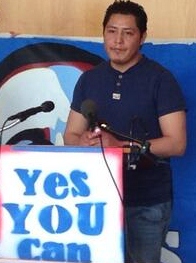 Today ULA member Jose Luis Piscil joined a group of undocumented individuals to file a rule-making petition to the Department of Homeland Security. The “Si Se Puede (Yes You Can)” rule-making petition argues that DHS can and should alter its rules to expand the Deferred Action for Childhood Arrivals (DACA) program to the fullest extent possible and suspend deportations for undocumented workers, just as DHS did for undocumented childhood arrivals. The petition was drafted by the National Day Laborer Organizing Network and the Immigration Justice Clinic at Cardozo School of Law on behalf of Jose Luis and other undocumented immigrants in deportation proceedings.

Under the Administrative Procedures Act, members of the public are allowed to petition agencies for changes to existing rules. DHS must provide a response and explain its decision to grant or deny petitioners’ request.

During a press conference this morning at AFL-CIO headquarters in Washington DC, Thomas Chew of Cardozo Immigration Justice Clinic stated, “The Constitution gives the President unilateral power to determine when it is, and when it is not, in the national interest to initiate deportation proceedings. The only question that remains is whether this President will exercise his power to protect our nation’s immigrants and our nation’s economy from the devastation his immigration policies have wrought.”

For Jose Luis, a factory worker who has lived in New Haven for seven years, the petition is part of his urgent attempt to remain with his family, including his two US citizen children. He was apprehended by ICE in 2012 when police arrested him for a minor charge that was later dismissed.trailer movie Logan

“ICE put me in jail, not because of any criminal conviction, but because I had entered the country without papers,” says Jose Luis. “In jail, I thought about my wife, who was five months pregnant. I thought, ‘What if I never meet my son? What if my children grow up without their father?’” For about 80% of people in deportation proceedings from 2008 to the present, DHS initiated proceedings based on immigration violations, not criminal convictions, according to the Transactional Records Access Clearinghouse.

NDLON Staff Attorney Jessica Karp says, “This petition gives DHS the opportunity to correct years of reckless enforcement and also grant relief to immigrant workers and families who the President and leaders on both sides of the aisle all agree belong here.”Watch movie online The Transporter Refueled (2015)